Home » Blog » Monitors getting more expensive, headphones getting cheaper. How are prices changing during a pandemic? Part 2

Monitors getting more expensive, headphones getting cheaper. How are prices changing during a pandemic? Part 2 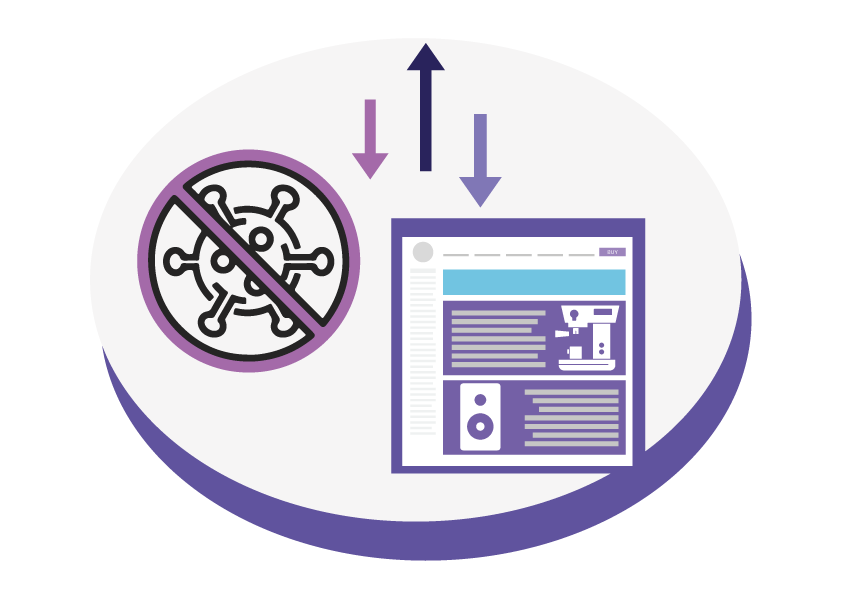 Due to the current situation connected to the pandemic of Covid-19, many people had to start working remotely. This caused an increase in sales of office supplies. Did the increased demand influence the price level of these products?

Let’s check how the prices of other office supplies changed. The products which will be analyzed in this article are:

A lot of people can’t imagine their day without a cup of coffee. Working in the office, we are used to freshly brewed coffee from a pressure coffee maker. Having ahead of them a perspective of a home office for many months, many people decided to buy their own coffee machine. For the analysis, 4 different coffee makers were chosen:

Similar to the first part of the article, the criteria for the choice of the particular models were as follows: different price shelves, different manufacturers, and affordable prices for an average customer.

Let’s check how the change of price developed for the products listed above from the beginning of March to the end of November. 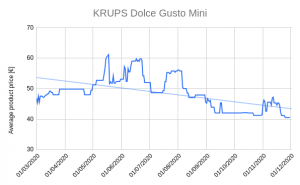 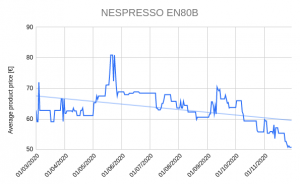 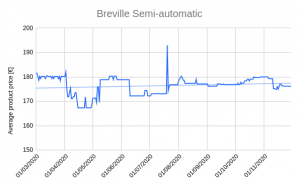 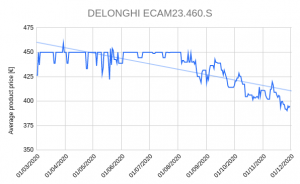 On the charts, one can observe that the prices of devices did not change at the very beginning of the pandemic. Let us check what has happened on the particular price shelves.

For the cheapest products, one can see that the prices raised in May. However, subsequently, they dropped to the level from March and were oscillating around this price. A coffee maker made by Krups in September got cheaper than it was in March and kept this level until the end of November. The price of Nespresso device started decreasing in October and the descending trend was kept even until the end of the examined period.

Considering the semi-automatic coffee machine of Breville, we can observe that the price trend was a constant one. For around one month the prices dropped by around 10 euro, however, at the beginning of May, the prices returned to the initial value and stayed at this level until the end of the considered time range.

For DeLonghi product, one can observe that the price was stable from March till August. Then it started to fall, and such a trend was present until the end of November when the price was almost 10% lower than it was in March.

Analyzing particular plots, there is no visible trend for all the devices. To check if any particular trend occurs, the plot of average indexes of prices was made. 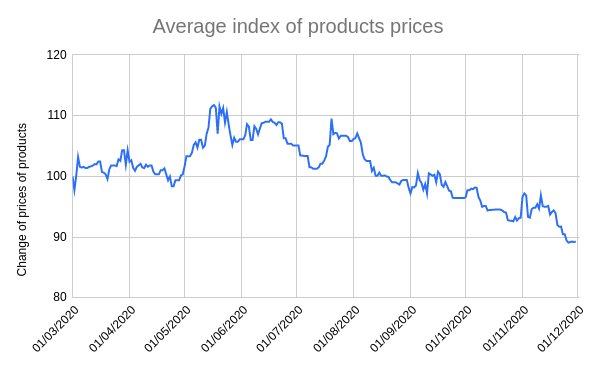 To check the wider time range, let’s check how the prices developed in November compared to the March average. 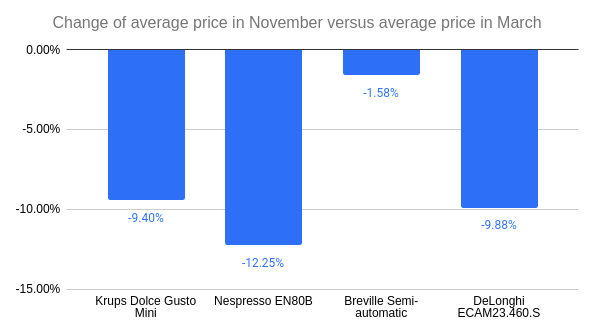 According to the data, the prices of all the coffee makers decreased. Prices of Krups Nespresso and DeLonghi devices dropped by around 10%. Only semi-automatic Breville product stayed at the same price level, getting cheaper by only 1.58%

Based on the chosen products, we can see that the coffee makers became more affordable, and more people will be able to have their own coffee machine at home.

A laptop placed directly on the desk does not allow a user to work ergonomically. The computer’s screen is placed too low, forcing users to bow their heads. What is more, a laptop placed on such a surface cannot cool itself properly. To improve work comfort and the efficiency of a computer, it is worth having a laptop cooling pad.

For the analysis we have chosen the 3 following cooling pads:

All of the considered pads in March were at a similar price. The difference between the most expensive and the cheapest one was around 7 euro. 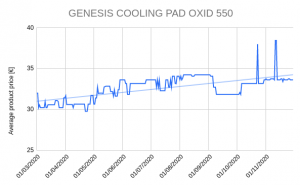 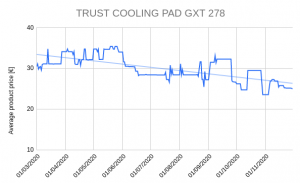 Looking at the charts, one can observe an interesting phenomenon. Prices of the most expensive and the least expensive products were rising, while the Trust Cooling Pad was getting cheaper. However, the changes in prices didn’t start at the beginning of the pandemic. For Genesis Pad the price was stable until the end of April, then it started rising to obtain its highest value in the middle of August. Despite the temporary drop in September, the average price in November was at the same level as in August.

Considering the Trust product, the price started to drop at the end of May. In spite of the momentary raises, the descending trend was visible until the end of November.

For the most expensive Pad from the group, CMST Pad, prices were stable until August. Then the prices raised to around 40 euro and stayed at this level. 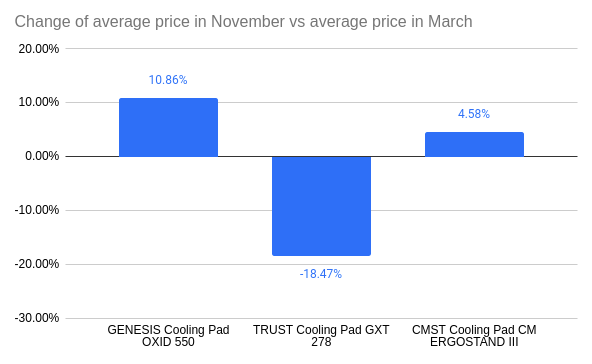 According to the previous observations, the price of the two products rose while the price of one decreased. The price drop was a significant one, because almost by 20%. Such a huge percentage of changes of product prices with initially small differences caused that the classification provided at the beginning of the section changed.

Trust cooling pad switched its places with the cheapest Genesis device. What is more, in November it was cheaper even by almost 9 euro. Such a difference in price can be a significant factor for a consumer while making a purchase. CMST pad got slightly more expensive, increasing the price gap between competitors. The price difference between the most expensive and the cheapest product was equal to on average 15 euro, so two times more than it was initially.

We can see that the products which were on the same price shelf in March, differentiate and the current price difference is huge enough to influence the customer decision.

Wearing headphones during long online meetings can be uncomfortable. If the sound quality of a laptop is not sufficient, then it is necessary to buy external speakers. For this purpose, we have compared the prices of 4 computer speakers of different brands to 90 euro.

Let’s check how the plots showing the change of price of these speakers look like. 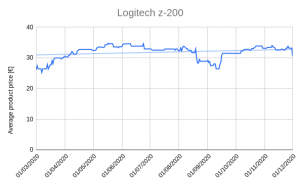 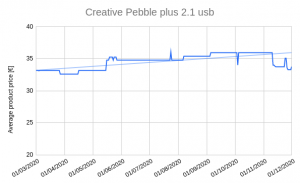 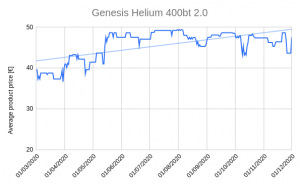 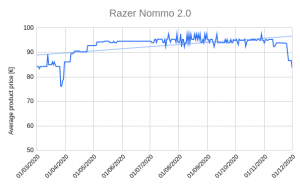 Next, price-wise, is Creative speakers. Their price was stable until the middle of May when it reached the level of around 35 euro. Then it raised to 36 euro until 11.11 when it dropped to 33 euro and stayed at this level till the end of the considered time range.

In the case of Genesis speakers, prices started to increase at the end of March. The ascending trend was present until the middle of May when the price reached the level of around 48 euro and remained at this level until the end of November.

The most expensive speakers started to get more expensive at the end of March. The rising trend stabilized in May when speakers cost on average 47 euro. The drop in price happened before Black Friday when the price was decreased by around 7 euro. 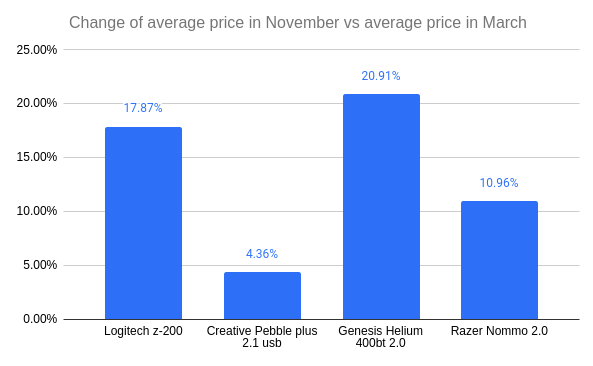 To observe the trend in a better way, let us use the plot showing the average index value for analyzed products. 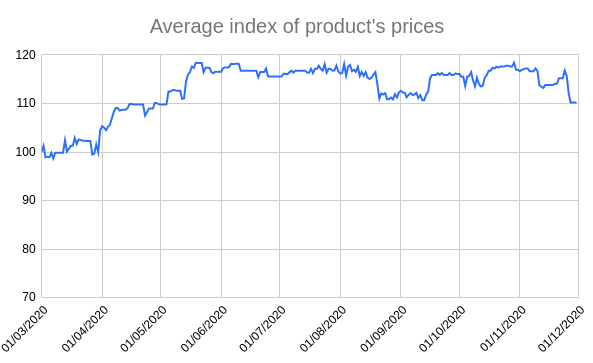 On the chart above we can observe that the average price of products was not changing until April. Then it started to rise rapidly, stabilizing in the middle of May slightly below 27 euro. Afterward, it was stable for most of the time, dropping temporarily to around 25 euro during the start of the school year. Then it came back to its previous price and remained at this level until Black Friday when the price decreased significantly.

Based on the given examples, trends of price change are visible.

For coffee machines, it can be observed that the prices are decreasing.

For laptop cooling pads we have observed the trend of price differentiation between products, even though they were initially at the same level. The price change was significant enough to influence customers’ choices.

Analyzing the prices of computer speakers, one could observe the price rise in April and May, then significant sales in November. However, it is worth mentioning that despite the drop, the prices in November have never reached the level from March.