Home » Blog » The older, the cheaper? Not necessarily. We will try to find out how long manufacturers keep the price of electronics high.

The older, the cheaper? Not necessarily. We will try to find out how long manufacturers keep the price of electronics high.

The prices of electronic goods are frequently overestimated when they appear on the market for the first time. The manufacturers are aware that the greatest fans, so-called early adopters, are willing to pay a lot only to get the latest model of their device first. Then, the prices start to fall gradually, and you can buy the product for less than you would have to pay when it was sold for the first time. The question, however, is when does the price begin to fall, and by how much? Does the product’s price decrease more with time, or are there bigger discounts shortly after the release?

Contents
1 Analysis
2 First price drop after release
3 When does the price stop falling?
4 The older, the cheaper?
5 When were the prices of the devices at their lowest?
6 Conclusions

In our survey, we have analyzed 9 popular products, including smartphones, smartwatches, wireless headphones, and a console. The data were collected using the Dealavo price monitoring tool. The analyzed data concern prices from the 8 largest online stores with electronic goods in Poland. The indicated values are the lowest prices on a particular day.

The moment when the price of a product begins to drop depends on many factors, and it is directly connected with the pricing strategy of the manufacturer and distributors. One of the important factors is the presence of a competitive product. If the customers have no alternative or they believe that a specific brand is the only right choice, the price may stay the same for a very long time. Let’s find out what the situation looked like for the analyzed products: 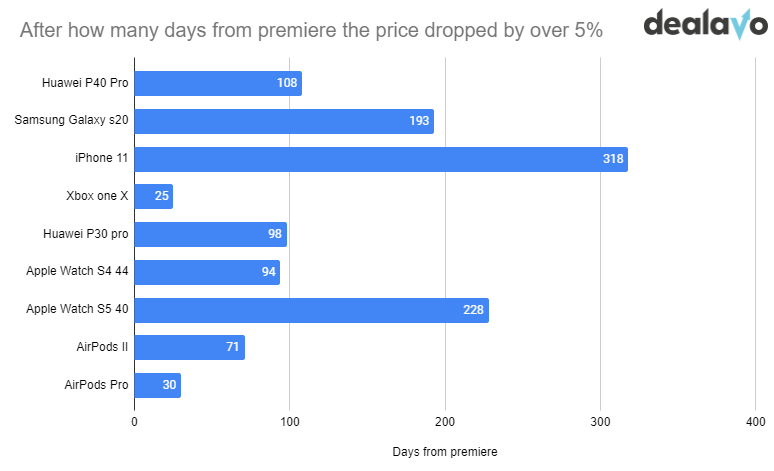 The undisputed champion of keeping the prices steady is Apple. Their S5 smartwatch and iPhone 11 maintained their price for more than six months. What is more, the prices of iPhone remained at the same level for over 10 months!

The Samsung smartphone is the only product not manufactured by Apple whose price did not change for more than 4 months. Huawei smartphones maintained their initial price for over 3 months, and the Xbox One X console – for less than a month. This proves that more exclusive products, with smaller competition, take longer until their price starts to drop.

Interestingly, after a temporary drop, the price may increase again, as a result of which the device cannot be bought for less than the initial price for several more months.

When does the price stop falling?

The answer is, obviously, “it depends”. Let’s see the percentages of price decrease after different periods from the release of the products:

We can see that, for most products, there is virtually no difference in price between the 9th and 12th month after release. This suggests that the price of Huawei P40 Pro is also not going to decrease significantly.

The older, the cheaper?

If we follow this logic,  all products that have been on the market for at least one year should much cheaper, their price has stabilized and will decrease only slightly over time. Unfortunately, the reality is not that simple.

As shown by the table above, the price of Huawei P30 Pro increased between the 9th and 12th month by 3 percentage points. However, significant changes may be observed for the Xbox One X console. 18 months after release, it cost 31% less than at the time of release, but the price increased just six months later, and it was only 13% lower than the initial price. 3 years after the release of One X, Microsoft launched a new model of the Xbox Series X console, at which point the price of its predecessor amounted to 80% of the initial price. This represented a price reduction of only 20%. According to the data presented above, it would therefore be better to buy the console after 18 months than after 3 years. As mentioned in our article, product prices do not always drop after the release of the new model. 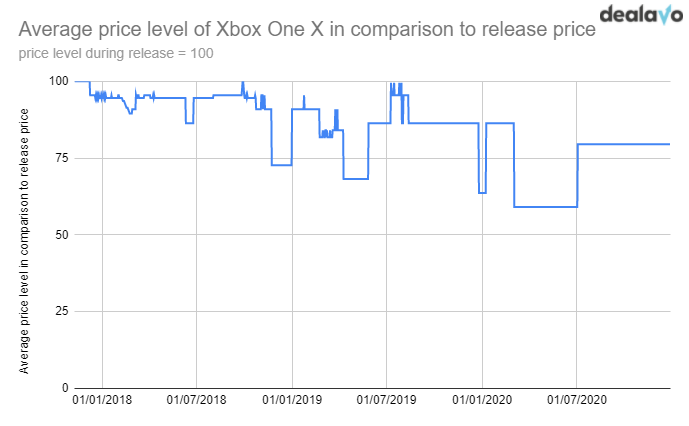 When were the prices of the devices at their lowest?

Finally, let’s find out what discount was the highest in the history of the analyzed devices and how many days had passed after release until such a discount was offered.

We can see that producers and distributors cut prices more during occasional promotions than the product drops on its own. During such a promotion, the device may be cheaper even than in 2 or 3 years after its premiere.

The prices of certain products may remain the same for up to 10 months after their release. This is particularly true for brands regarded as exclusive, which offer products that cannot be easily substituted. When the price starts to fall, it may be as much as 30% lower than the initial price.

9 months after the release of the product, the price of most of the analyzed devices stopped dropping, and it was comparable to the price recorded 3 months later. That means that the margin drops the most during this period.

On the other hand, we can see that the right promotion, even during the first year after the launch of the equipment,  may decrease the price more significantly than it would decrease on its own in 2 or 3 years.