Home » Blog » How does Apple use being a luxury brand? – Case study of a skimming strategy

How does Apple use being a luxury brand? – Case study of a skimming strategy

The skimming, creaming or prestige strategy is a pricing strategy intended to set the highest possible price after the launch of a new product on the market and sell prestige products to buyers for whom price is not a limiting factor. To use this strategy, the company must have a strong brand, devoted customers and products perceived as luxury goods, and the market has to be stable. You can learn more about this strategy from our article about price skimming.

Many documents concerning the skimming strategy indicate that this strategy is best illustrated by the Apple company. However, it is difficult to find a document based on actual data. Let’s see, therefore, if the US manufacturer actually makes use of the fact that is regarded as a premium brand.

Let’s start with the most popular Apple product – the iPhone. This year saw the launch of the 12th model of this smartphone, and we will try to compare its price to the price of its predecessor and to prices of other popular phones made by other manufacturers.

The above-mentioned comparison shows that the products of the US manufacturer are distinguished by the price but not to an exceptional extent. At the time of launch, iPhone 11 was more expensive than Huawei P40 Pro only by PLN 50, which is approx. 1% of the price.

However, the price of the phone increased by PLN 600 for the next iPhone model. A similar thing could be observed in the case of the Huawei phone, where P40 Pro cost PLN 500 more than P30 Pro. In this respect, the strategy of the Apple company is also not unique.

Price after the launch

One of the aspects of premium brands is that they maintain high prices after the launch of new devices. In our article on the life cycle for electronic products, we indicated that prices usually stabilised after 9 months, but Apple broke out of this trend. Let’s see how the prices changed for the examined phones.

In the chart, the prices were indexed up to 100, where 100 was the price at the product launch date.

We can see that the prices of smartphones did not decrease during the first 3 months. It was only after that time that a difference between the brands became noticeable. Up until the 7th month after their launch, Galaxy S20 and iPhone 11 did not get any cheaper. It was only until one month before the launch of the new iPhone that the price of the Apple product began to decrease, but only slightly in comparison with the decrease in prices of the other examined devices. However, we can see that the Samsung model is following the iPhone trends, and it also uses its position to avoid a price reduction.

However, Apple is more than just phones. Is the pricing strategy used in Apple’s iPhones also noticeable in the case of smartwatches? Let’s compare Apple devices with other well-known brands and see if they also stand out among their competitors.

We see that the initial price of Apple models increased between 2018 and 2019. However, the price has not changed with the launch of the S6 model. Apple Watches are one of the most expensive products in their category but, just like phones, the initial price of the Samsung watch was also on the same level.

Price after the launch 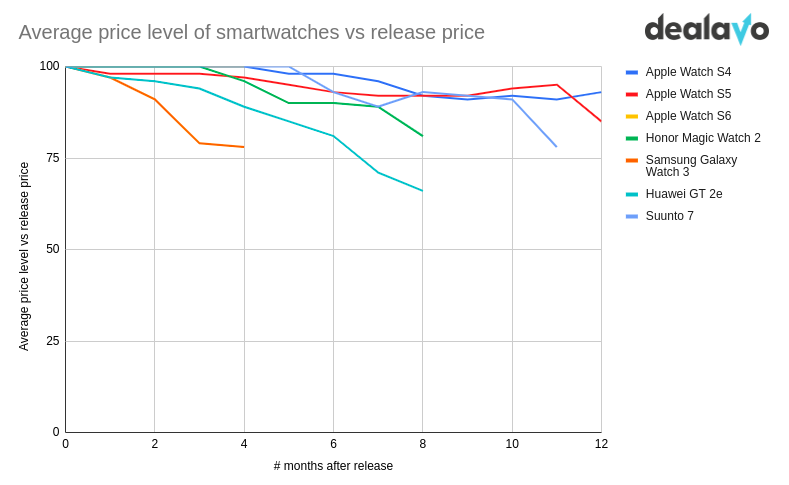 The chart shows that the three products that did not decrease their price after the launch for more than 3 months included Apple Watch S4, Honor Magic Watch 2 and Suunto 7. Apple Watch S6, launched in September 2020, is on track to join this group – so far, 3 months after its launch, its price has not decreased.

Although less than 12 months have passed since the launch of some of the models, we can see that, for instance, Samsung Galaxy Watch 3 did not take up the fight with Apple products in this segment, and its price decreased by the whole 22% four months after the launch.

After the change of the prices, the chart shows that, approximately six months later, the prices of many products start to decrease significantly, but this is not the case with Apple watches. The prices of their products did not decrease by more than 20% even one year after the launch. Interestingly, the price of Apple Watch S4, which has now been on the market for 2 years, has decreased only by 18%.

We can see, therefore, that also in this category Apple uses the advantage of being regarded as a premium brand, and it no longer competes with popular companies, such as Samsung, but with specialised manufacturers, such as Suunto.

As shown by the analysis of historic prices, it is reasonable to point out Apple as an example of skimming. They use this strategy in at least two categories of their products – phones and watches. However, this is not a unique strategy on the market because Samsung is making similar efforts in the case of phones, and the same strategy is employed by Suunto for watches.

There is also another characteristic of skimming that does not apply to Apple quite as well. That is because the second rule of skimming is that once the early users purchase a particular model, that model grows cheaper, becoming more accessible to other consumer groups. In the case of Apple devices, no such decrease was recorded because even 2 years after the launch they cost approx. 80% of the initial price, and they are still classified as premium products, even when they can no longer be regarded as novel goods and when their specifications no longer match the latest products of the competition within the respective price category.

Do you want to learn more about pricing strategies in e-commerce? Download our free ebook!